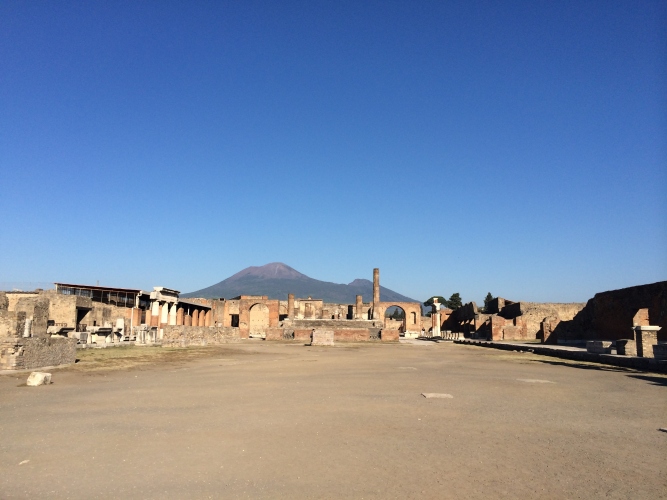 Pompeii is undoubtedly one of the world’s best known archaeological sites. Its fame comes from its dramatic destruction and extraordinary preservation as a result of an eruption of Mount Vesuvius.
On August 20, A.D. 79, Pompeii was rocked by more earth tremors, although they do not seem to have been as severe as the 62 earthquake. Springs in the area dried up. The ancient Pompeians did not recognize that these were signs of the imminent eruption of Vesuvius. Therefore when the volcano went off between noon and 1pm on August 24, it caught everyone by surprise. According to Pliny the Younger, a 12-mile high cloud of ash and rock was thrown into the air, blocking out the sun. By chance, the wind was blowing from the northwest, so when the volcanic matter began to fall, it was blown in the direction of Pompeii, Herculaneum, Stabiae, and other sites to the southeast. The eruption produced total darkness, as well as electrical discharges from atmospheric disturbances. Ash, pumice, and rock fell, initially with a low density.

This piled up in streets, on rooftops, and fell in through every open space such as windows. Some roofs collapsed under its weight and falling debris may also have caused injury.
This phase of the eruption continued for the rest of the day. People wandered around in darkness, pushing their way through pumice and debris, which was piling up. Some may have tried to escape, while others decided to wait it out. Surely no one had experienced such a catastrophe before so they did not know what to expect from it.