The city is best known as the site of the Abbey of Montecassino and the Battle of Monte Cassino during World War II, which resulted in tremendous Allied and German casualties as well as the near total destruction of the town itself.
The Battle of Monte Cassino was a costly series of four battles during World War II, fought by the Allies with the intention of breaking through the Winter Line and seizing Rome. On February 15 the monastery, high on a peak overlooking the town of Cassino, was destroyed by 1400 tons of bombs dropped by American B-17, B-25, and B-26 bombers. The bombing was based on the fear that the abbey was being used as a lookout post for the Axis defenders. Two days after the bombing, German paratroopers poured into the ruins to defend it. From January 17 to May 18, the Gustav defenses were assaulted four times by Allied troops. These operations resulted in casualties of over 54,000 Allied and 20,000 German soldiers. 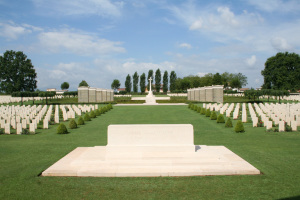